So far, in reading, Call of the Wild, by Jack London, I have really enjoyed the vivid imagery of action of the savage life of the brutal north, and the life Buck must lead. I think I will analyze how the symbol of a relatively basic choice, living wild, or with humanity, through Buck, is part of the larger choice between what feels natural and what is familiar. This is a common theme throughout literature, and is often the same sort of idea, of a life in the wilderness versus society. Beyond this, though, the theme of a choice of what feels natural versus what feels familiar is a very common conflict. “Thus, as token of what a puppet thing life is the ancient song surged through him and he came into his own again…” (London 14). This seems that it should be a topic of analysis that has many more specific ways to analyze and other works of similar context.

I think Jack London does an excellent job in analysis of point of view from a rather unconventional source. He personifies a dog wonderfully, yet not over doing it to the point where he is no longer a dog. This perspective helps to provide a more brutal view of the surroundings the events are taking place in. Characters are analyzed in a different way than if from a human perspective, and humans are depicted in a different way than human to human comparison. The imagery provided is so strong and vivid, and is easy to picture a seemingly foreign life in the frigid north during the Klondike gold rush. 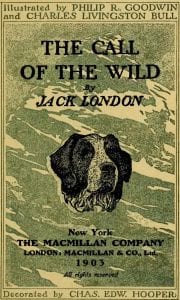 In The Call of the Wild, Buck, the protagonist, is presented with the difficult choice of living amongst society or satisfying his urge to return to the wild. Buck, however is a dog, and is personified to be the main character. Kidnapped from his comfortable home on an affluent estate, he is taken from the only life he has known, and sold into a world that is totally foreign. Forced to be a sled dog in the frigid north during the Klondike gold rush, he is surrounded by a brutal world dominated by violence and a need for self sufficiency and strength. He feels an eternal attachment to this world, and that it is where he was meant to be. He is presented with a great conflict  where he must decide, if he will submit to life among humans, or satisfy his urge to retreat to the wild, where he feels he belongs.

The conflict within Buck of feeling trapped in a certain way of life out of familiarity is felt within many people. While not necessarily being the urge to run wild in the frigid north, the conflict between conformity with society versus individualism is a common literary theme. Buck confronts this as he traverses the snow covered expanses with the sled team, forced to toil long hours and surrounded by a place that was trying to call him home. He learns to forget the life he left behind and let himself be guided by what he feels within. He must make the choice, is it to remain as he is, or leave society behind, the only world he has ever known.